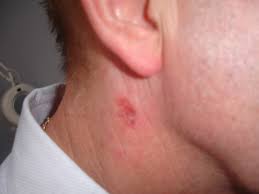 A 43yo Irish male patient was referred to Ailesbury with a slowly enlarging lesion on the right side of his neck that wouldn’t heal and bled when traumatized. The patient described it as an acne lump that had appeared about a year before and he felt in the beginning that he could express some pus or fluid from it from time to time. More recently he had become concerned because a course of antibiotics from his GP had failed to make any impact on the lesion. The patient gave a history of occupational sun exposure as he worked in the construction industry. There was no relevant medical history and the patient did not have any clinical evidence of autoimmune or allergic diseases.

On examination the lesion appeared eroded and ulcerated and bled easily when traumatized. There was some crusting at the anterior margins. The presence of rolled borders, pearly edges and telangiectases gave a clinical suspicion of basal cell carcinoma and a decision was made to proceed to removal rather than do a biopsy. The author feels that any doctor should consider BCC in any patient with a history of a sore or skin anomaly that does not heal within 4-6 weeks and occurs on sun-exposed skin, especially if it is dimpled in the middle. These tumors may take many months or years to reach even 1 cm in diameter.

After numbing the area with local anesthesia, an 11 scalpel to remove the entire growth along with a surrounding border of normal skin as a safety margin. The skin around the surgical site is then closed with a number of stitches, and the excised tissue is sent to the laboratory for microscopic examination to verify that all the malignant cells have been removed.

People who sunburn are more likely to develop skin cancer than those who do not; however, sunlight damages the skin with or without sunburn. History of any prior treatment to the index tumor should be elicited, as well as history of any prior non-melanoma skin cancer. In patients with recurrent tumors, deeper invasion should be expected. Recurrence following radiation therapy is often biologically more aggressive.

Characteristic features of BCC tumors include the following:

BCC seldom causes regional or distant metastasis, with the exception of the basosquamous type. To evaluate for lymph node metastasis, particular attention should be taken to examine the parotid posterior auricular, suboccipital, and upper cervical groups of lymph nodes.

There are several different histopathological types of BCC exist, each with distinct clinical presentation. (1)

Basal cell carcinoma below the epidermis. Nuclear palisading at the peripheral layer of the tumour. 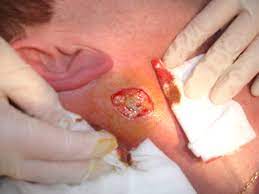 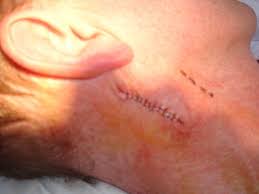 Nodular basal cell carcinoma is the most common type of basal cell carcinoma and usually presents as a round, pearly, flesh-colored papule with telangiectases. More than 60% of BCCs belong to this subtype. As it enlarges, it frequently ulcerates centrally, leaving a raised, pearly border with telangiectases, which aids in making the diagnosis. The tumor may present as a cyst or pigmented with brown-black macules making it like a melanoma. Keratotic BCC is a variant of nodular BCC and is usually clinically indistinguishable from nodular BCC histologically.

With this variant of BCC, tumor infiltrates the dermis in thin strands between collagen fibers, making tumor margins less clinically apparent. Mohs micrographic surgery is the treatment of choice for infiltrative basal cell carcinoma. Because of its growth pattern, electrodessication and curettage has a significantly higher recurrence rate when used to treat infiltrative BCC compared to the treatment of nodular BCC; other treatment methods should be sought.

This aggressive BCC subtype has the typical BCC distribution. It is not prone to ulceration, it may appear yellow-white when stretched, and it is firm to the touch. It may have a seemingly well-defined border.

Morpheaform basal cell carcinoma is an uncommon variant in which tumor cells induce a proliferation of fibroblasts within the dermis and an increased collagen deposition (sclerosis) that clinically resembles a scar. This form accounts for 10% of lesions. Such lesions appear as flat or slightly depressed, fibrotic, and firm. The morpheaform (sclerosing) type of basal cell carcinoma is often the most difficult type to diagnose, as it bears little resemblance to the typical nodular BCC. Ulceration, bleeding, and crusting are uncommon and these tumors are commonly mistaken for scar tissue.

Superficial basal cell carcinomas are seen mostly on the upper trunk or shoulders. This type of BCC grows slowly, has minimal tendency to be invasive, and appears clinically as an erythematous, well-circumscribed patch or plaque, often with a whitish scale. Occasionally, minute eschars may appear within the patch or plaque. The tumor often appears multicentric, with areas of clinically normal skin intervening among clinically involved areas.

Basal cell carcinoma (BCC) is also a feature of basal cell nevus syndrome (Gorlin syndrome) (2) an autosomal dominant inherited condition. The gene responsible for this syndrome is located on arm 9q, and chromosome abnormalities develop in some patients. Multiple BCCs begin to appear after puberty on the face, trunk, and extremities. In many cases, the tumors are highly invasive and may involve areas around the eyes and nose (3)

With an incidence of 70 to over 800 new cases per 100 000 persons per year, basal cell carcinoma (BCC) is the commonest skin cancer, accounting for about 80% of all cases of non-melanoma skin cancer. BCCs are slow-growing, locally invasive, epidermal skin tumours which mainly affect white skinned people and very rarely metastasize. Of all BCCs, 85% occur in the head and neck region (4) and the incidence of this carcinoma (BCC) is increasing worldwide. As a result therefore, the cosmetic outcome is a particularly important issue the demand for novel and effective treatment modalities for BCC is high (5) 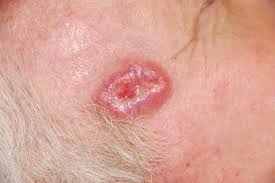 BCC is commonly treated with surgical excision, curettage, carbon dioxide (CO2) laser ablation or cryotherapy, depending on the tumor depth and the histological subtype of the BCC (6). The effectiveness of excisional surgery does not match that of Mohs, but produces cure rates around 90 percent. Photodynamic therapy (PDT) has been widely used for the treatment of superficial BCC in preference to excision due to its minimal invasiveness and satisfactory cosmetic results (7) (8). However, the efficacy of this treatment modality is limited in the treatment of deeper lesions and the more aggressive subtypes of BCC (9). Retreatment and recurrences of the disease are frequent if the tumor depth is >2 mm. (10) In order to improve the outcomes of BCC treatment, it is possible to combine CO2 laser ablation with topical methyl aminolevulinate (MAL) PDT and modified cryotherapy for the treatment of variable BCC. Conventional cryotherapy following PDT additionally kills the remaining cancer cells by interrupting vital metabolic cycles, destabilizing cell membranes,

Creating an adverse hyperosmolar environment and forming water crystals (9) The gold standard of treatment is Mohs surgical excision with histological control of excision margins, which has a 5-year recurrence rate of less than 3% on the face. For superficial BCC, approved medications such as imiquimod (total remission rate, 82-90%) and topical 5-fluorouracil (80%) are available, as is photodynamic therapy (71-87%). Other ablative methods (laser, cryosurgery) are applicable in some cases. Radiotherapy is an alternative treatment for invasive, inoperable BCC, with 5-year tumor control rates of 89-96%. Recently, drugs that inhibit an intracellular signaling pathway have become available for the treatment of locally advanced or metastatic BCC (11)